Halloween is always a non-event here, but if I ever had the opportunity to dress up, there is no doubt in my mind that I would choose to be a Harajuku girl. I have been obsessed with the idea ever since I was a high school student in Japan, buying glossy fashion magazines each week with bubblegum titles like 'POPTEEN' and 'Cawaii'. I couldn't understand the articles very well, but I loved looking at the street style pictures, all of which revolved around this mythical place - Harajuku.

Like many visitors to Tokyo, this year I was overwhelmed by the culture, colours and citizens of the real life Harajuku neighborhood. We went on a Sunday, hoping to catch a glimpse of the infamous fashion scene on display at Jingu Bridge - but were disappointed, as it was raining, and none of the Harajuku kids came out to play. The Harajuku girl remains as elusive as ever in my mind; a pastel, lolita dream.
The quintessential Harajuku girl can be embodied in one young Tokyoite, a 19-year-old who goes by the stage name of Kyary Pamyu Pamyu. She started out as a fashion blogger, and became a model after being scouted outside a convenience store in Harajuku. She went on to have her own range of fake eyelashes, and eventually started a singing career, with a string of infectiously catchy hits - including a song describing the benefits of wearing fake eyelashes - contained within her debut album titled 'Moshi moshi Harajuku' (Hello Harajuku).

Her music videos are, to put it bluntly, batshit wacky. One minute she is dancing cutely, brandishing a lollipop, the next she is vomiting eyeballs. In another scene, she runs gracefully down a street in pink platform boots, with a piece of toast stuffed in her mouth. It's all a visual tribute to the Harajuku she hails from, in the most extreme, expressive way possible.
Kyary Pamyu Pamyu is the perfect Halloween style icon. It's fitting that she has released a new music video in time for the holiday, aptly titled 'Fashion Monster.' I love her. I hope you do, too.

As a history student, I'm fascinated by Japan's role in World War II. The atrocities committed by the Japanese army, as well as the suffering of Japanese themselves, have not easily faded from public memory. Even today, broaching the subject of Japan's wartime history has the power to create diplomatic incidents throughout Asia.

During my time in Japan so far, I've visited quite a few monuments, memorials, and museums to do with the war. While most aim to promote peace, some controversially celebrate and commemorate Japan's participants in the war, including notorious war leaders and criminals. In this post, I share my impressions of some of these places. 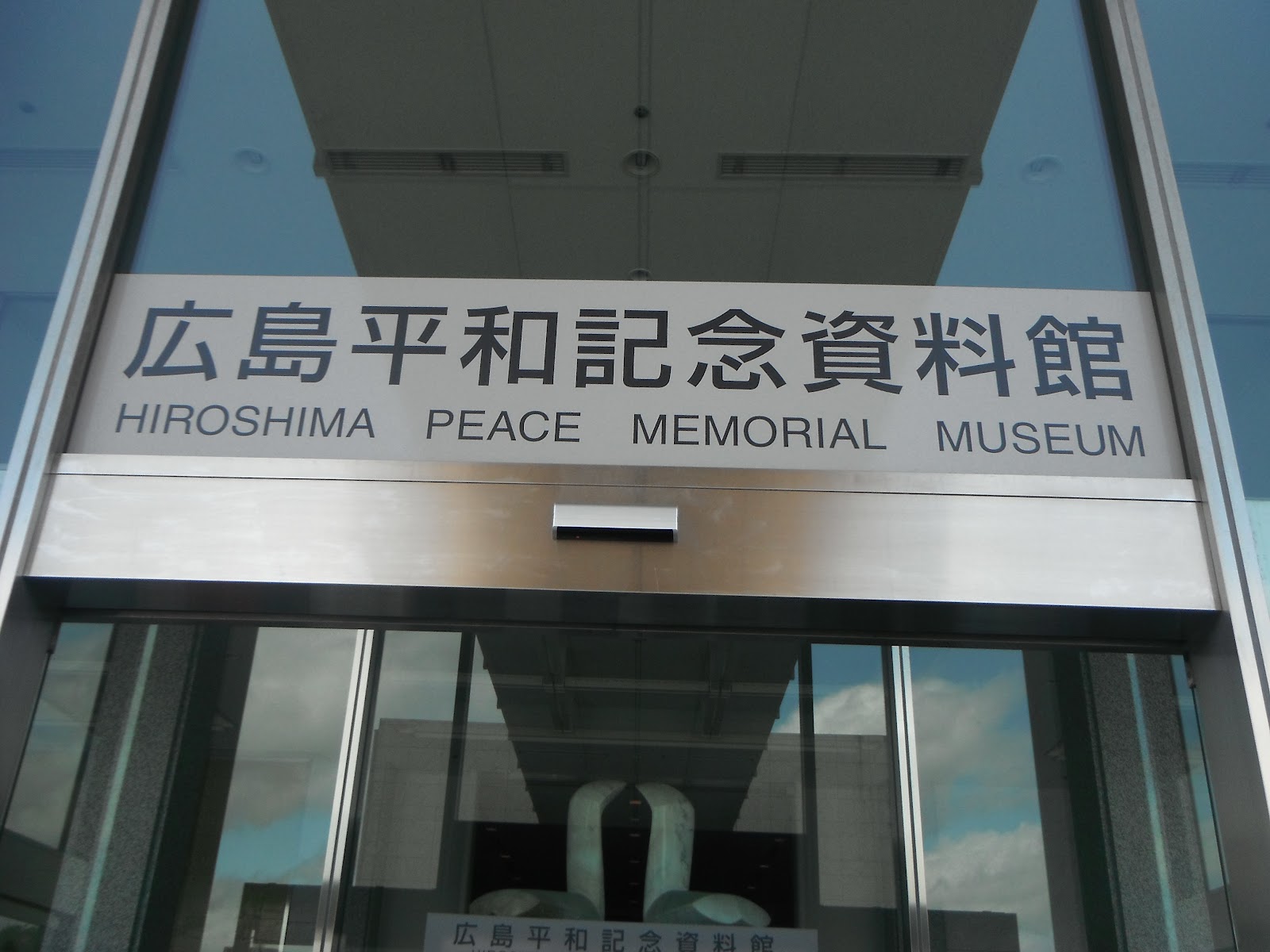 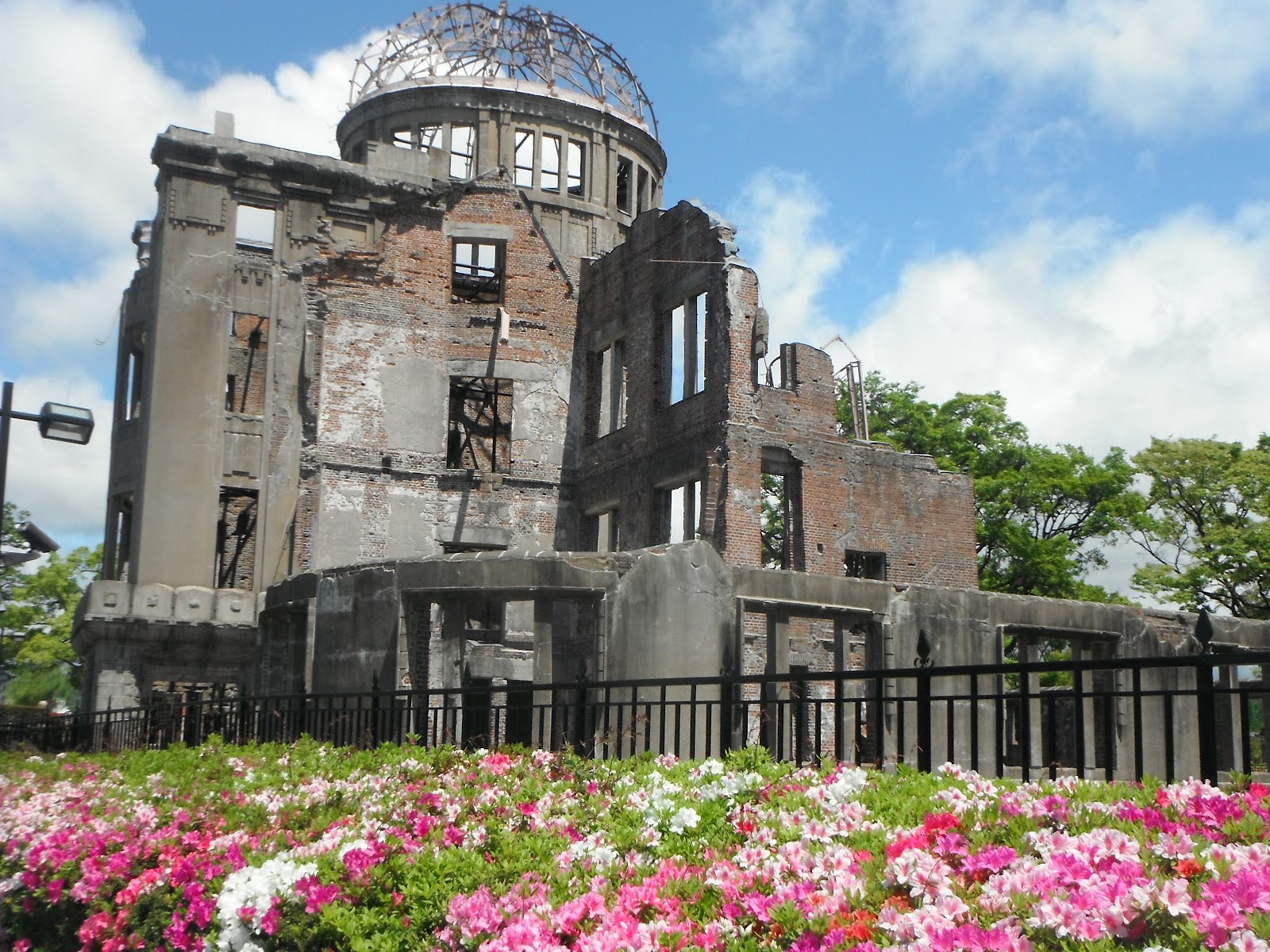 One of the most important museums in the world, the Hiroshima Peace Park Memorial Museum is often the main point of interest on tourists' Hiroshima itineraries. It's located near the exact spot where the atomic bomb exploded on August 6, 1945, and with the stark Genbaku Dome visible in the background, you are immediately confronted by the city's tragic history. Within the museum is a chronological background of the events leading up to the atomic bombing, with carefully included - albeit brief - mentions of Japan's own atrocities in Asia. This is followed by the aftermath of the bombing, right up until the present, focusing on the global effort to promote peace and anti-nuclear values. The final exhibit displays the human cost of the atomic bomb. It is here that you come across photographs and objects that are hard to forget - the shadow of a dead man, the charred remains of a child's tricycle and school lunch. Human hair, skin and nails, and the tiny paper cranes that a young victim, Sadako, folded before dying of cancer. It's an intense, hard-hitting place. It takes a couple of hours to go through the museum, but you'll want the rest of the day free for some quiet reflection in the park. 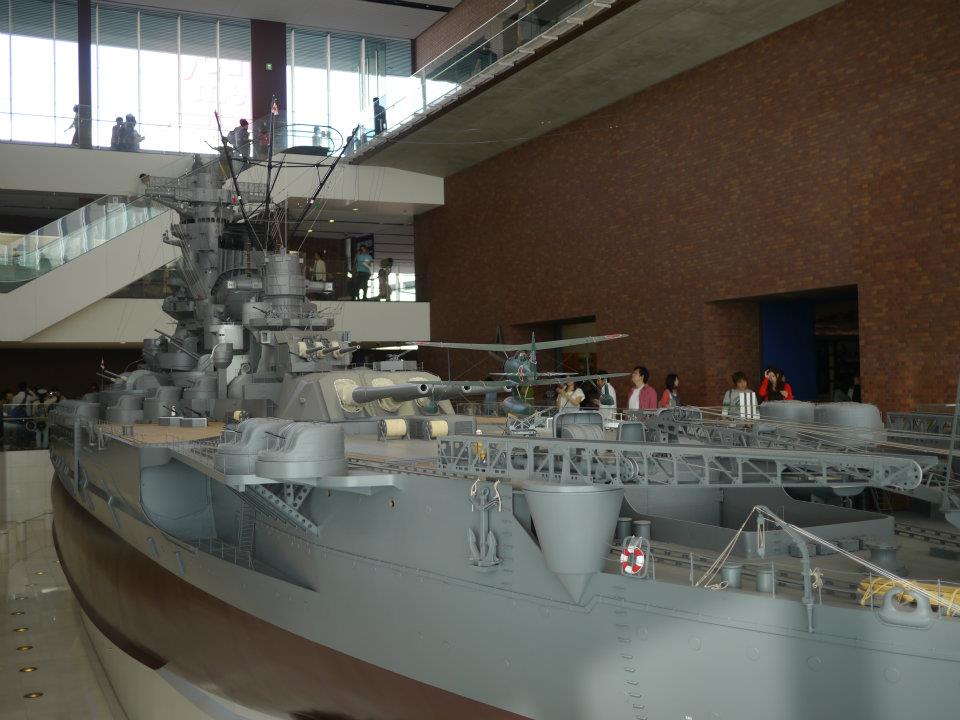 Less than an hour's drive from Hiroshima city is the Kure Yamato Museum, a museum about Japan's maritime history. The main attraction here is a one-tenth scale model of the famous battleship Yamato, which was actually built in the city of Kure. There is also a large objects room, with examples of fighter planes and human torpedoes. It all looks very gung-ho militaristic - but the museum maintains that, rather than promoting militarism, it is more of a tribute to the scientific and technological community, and engineering excellence of the Yamato. To reflect this, on one floor is an interactive room, where you can play with ship-handling simulators and take part in science demonstrations. All exhibits are in Japanese, but you can rent English headsets that provide a simple explanation of each display. 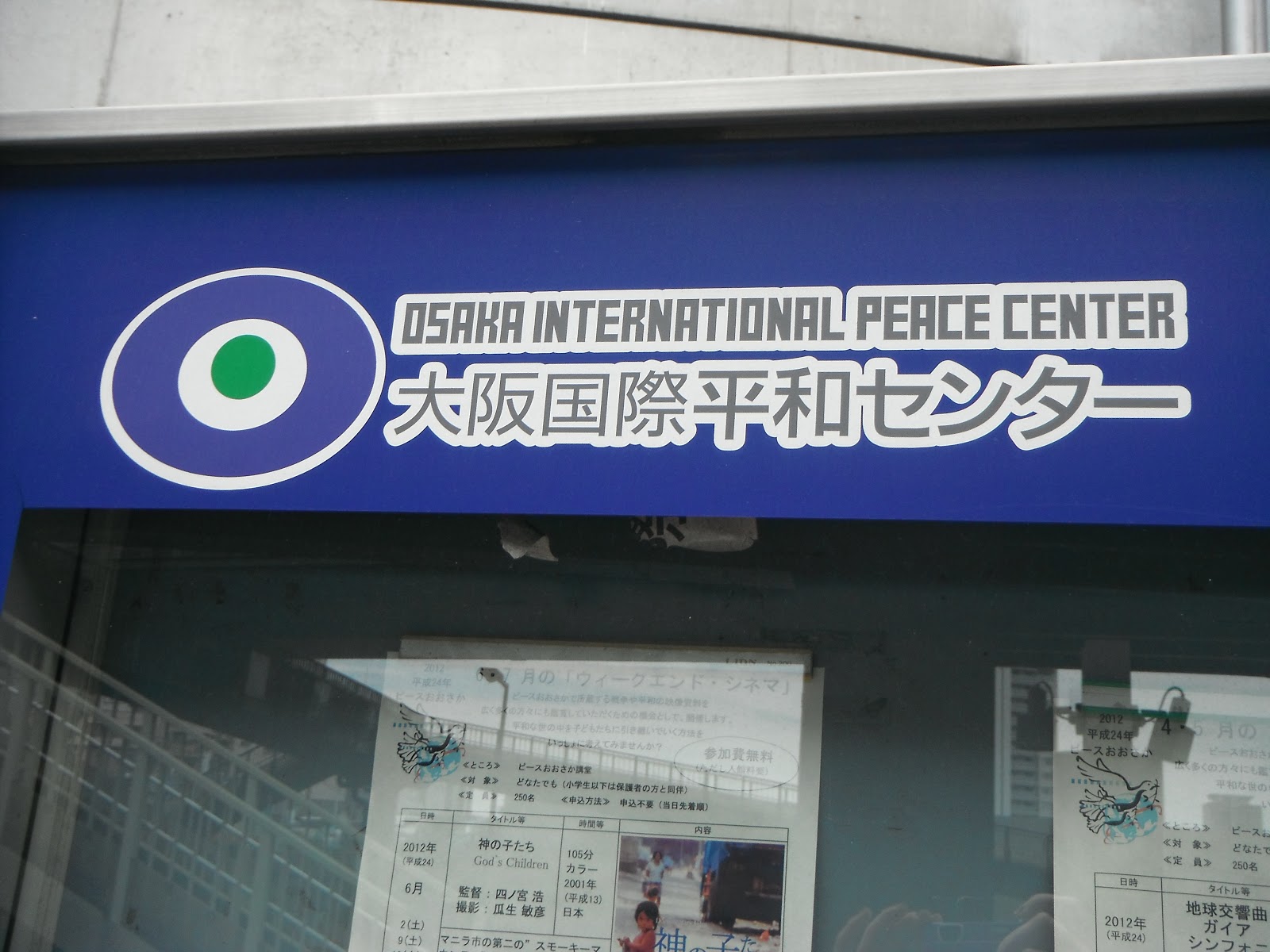 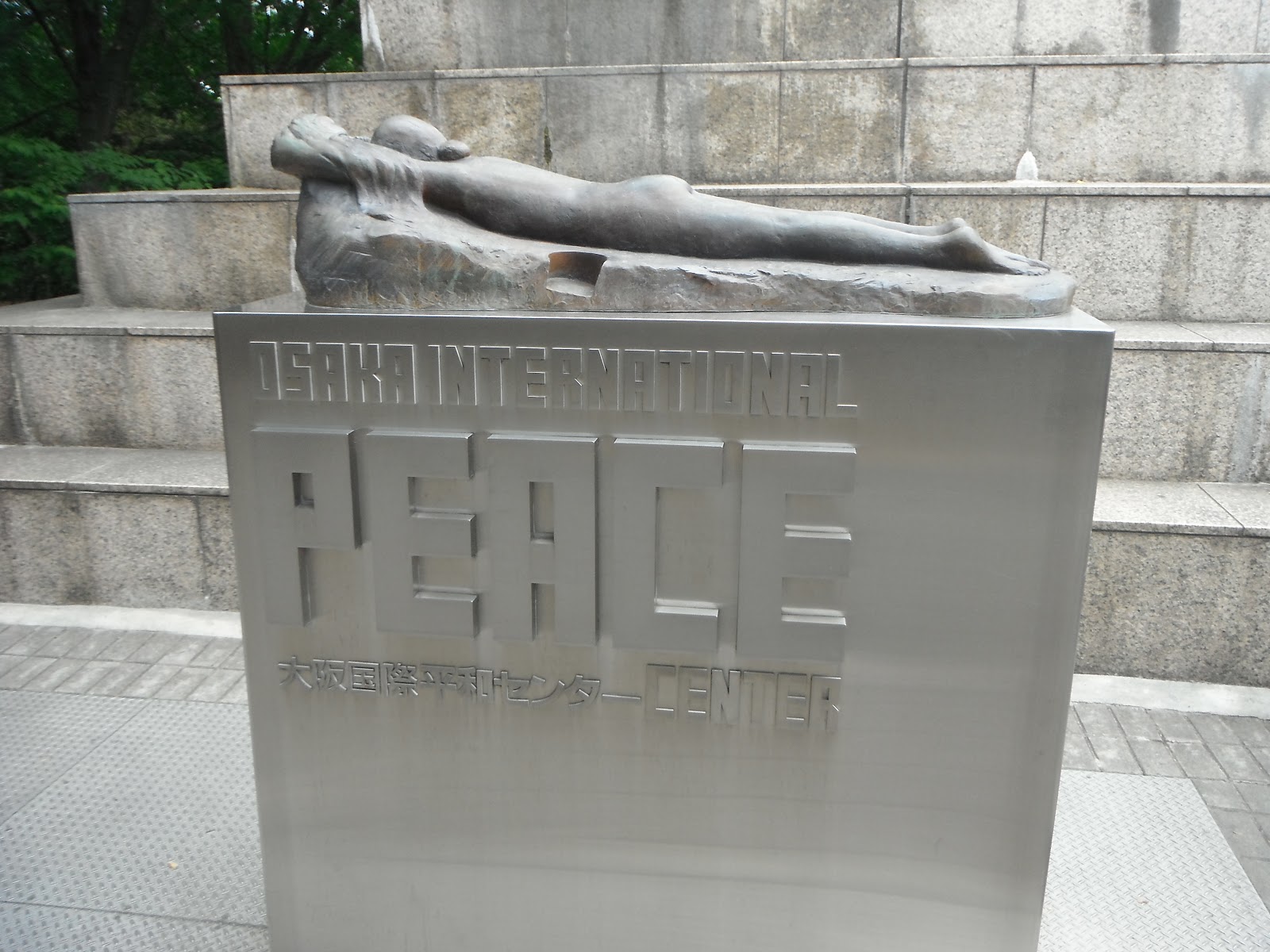 Peace Osaka is one of the more expressly anti-war of Japan's war-themed museums. It provides insight into the air raids on Japan: while most people know about the atomic bombings, many don't realise that more people died as a result of the firebombing attacks that devastated Japan's major cities. The museum has a diorama of Osaka, showing what it looked like in the aftermath of the air raids - it's scary to see the burnt ruins of familiar landmarks. It also has a special exhibition of atrocities committed by the Japanese in China, Korea, and Southeast Asia. While this may be seen as an attempt to move away from the 'victim' narrative that has typically dominated Japan's wartime history, for some reason this exhibit, unlike the others, has not been completely translated into English - which is interesting in itself. For a museum that claims to be 'international', you have to wonder if there are some historical narratives they are trying to hide. There is also an Auschwitz exhibit, which seems strangely out of place in a museum that otherwise focuses exclusively on Japan's role in the war. Located near Osaka Castle, the museum has seen better days - it's no Hiroshima Peace Park, but still worth a visit because the subject matter is really quite unique. 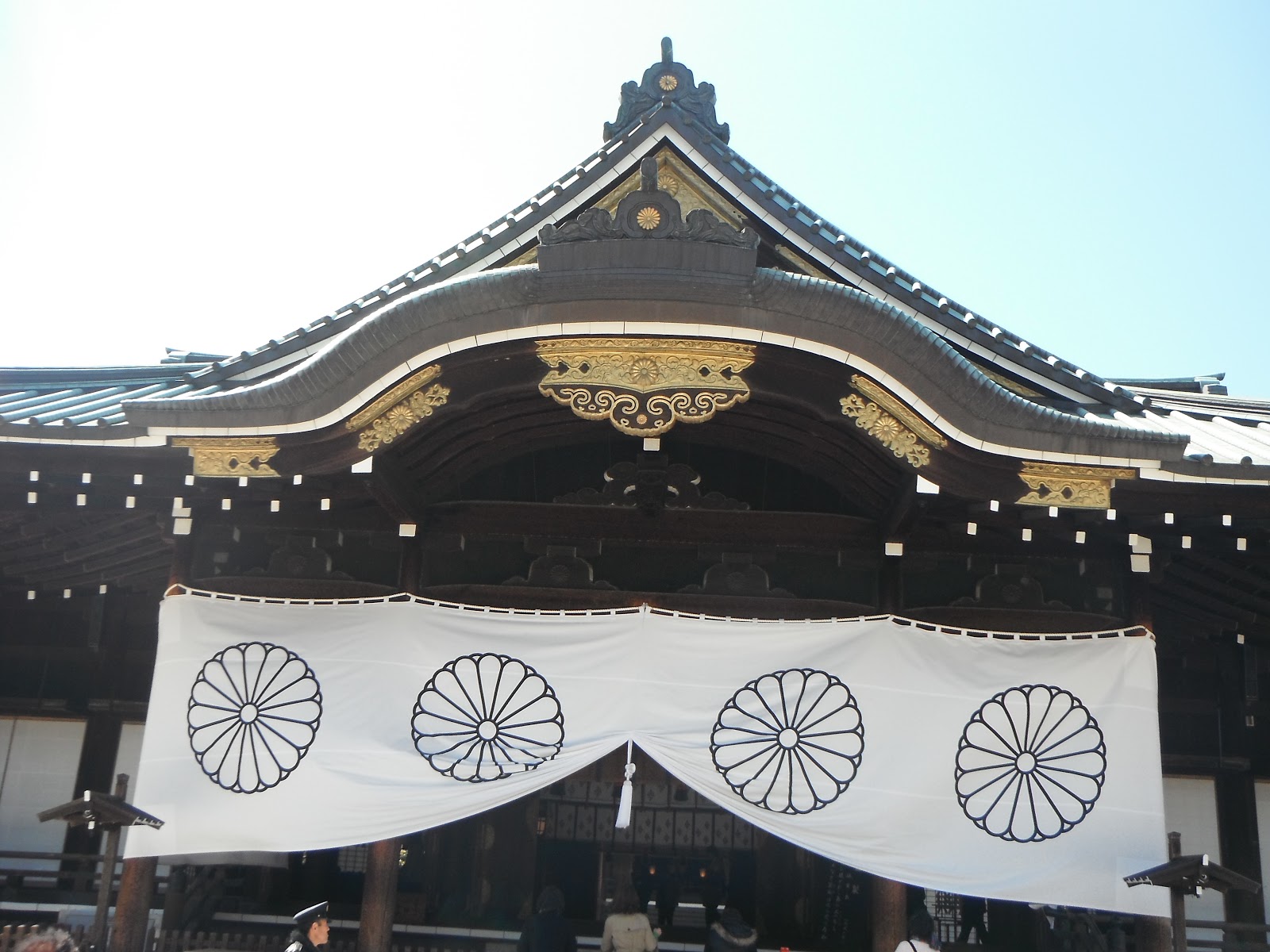 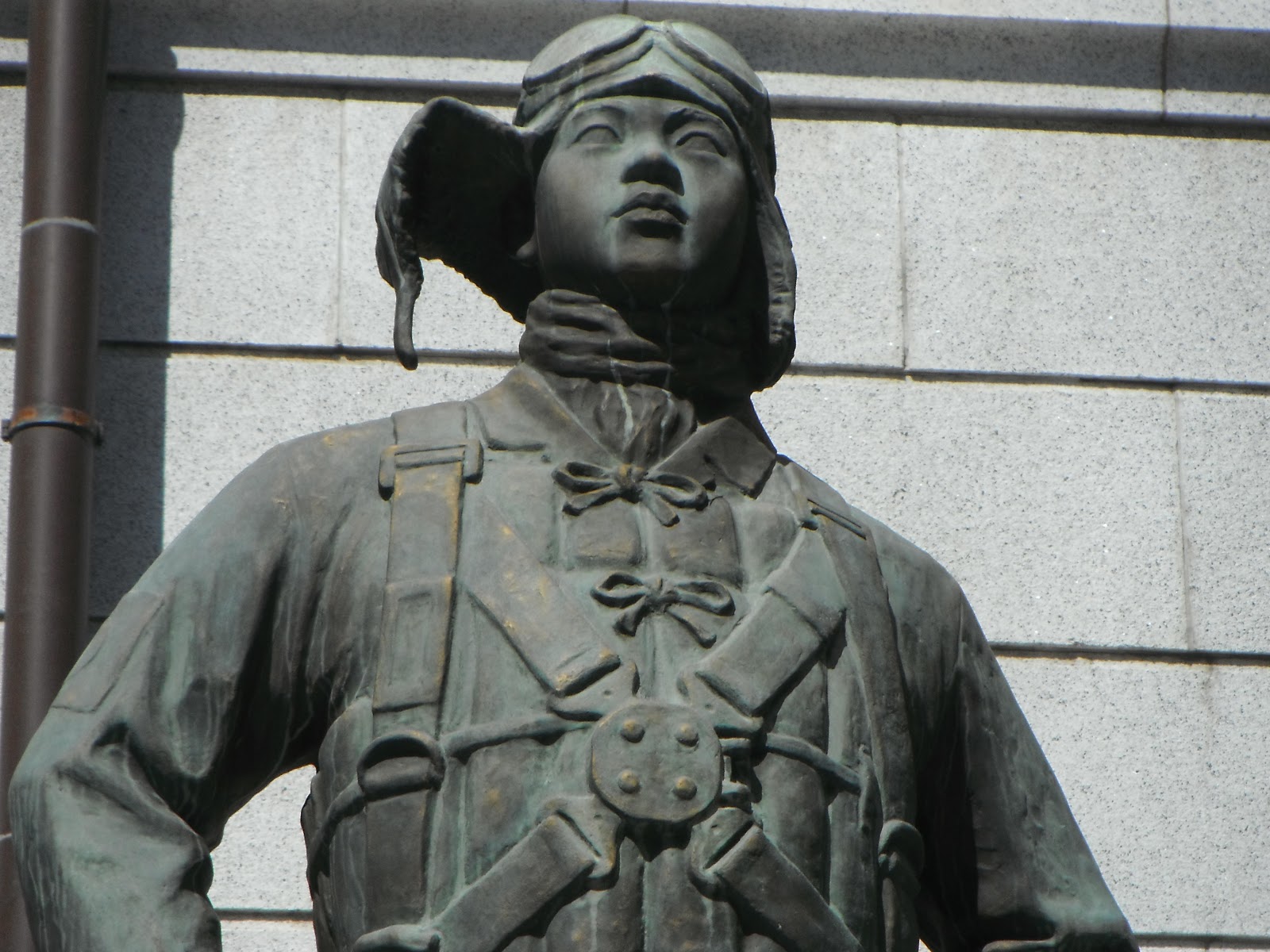 Yasukuni Shrine is an infamous shrine in Tokyo that is dedicated to all those who died serving Japan in war. As the shrine is said to hold the spirits of several war criminals, Yasukuni has attracted considerable controversy. The shrine makes international news whenever Japanese politicians visit, as the visits are seen as the government's support for Japan's wartime atrocities. As a shrine, it's beautiful, and you might not even pick up on its wartime connections on first sight. But walk around the main shrine building, and you'll find some interesting statues - including a kamikaze pilot, and a monument dedicated to Justice Radha Binod Pal, the only member of the Tokyo Trials to judge Japan's leaders as not guilty of war crimes. Yasukuni Shrine also houses the Yushukan museum, a military museum that tries to show the glory of Japan's wartime actions. There is even a gift shop that sells all sort of nationalistic souvenirs, such as rice crackers with the Rising Sun ensign imprinted on them. 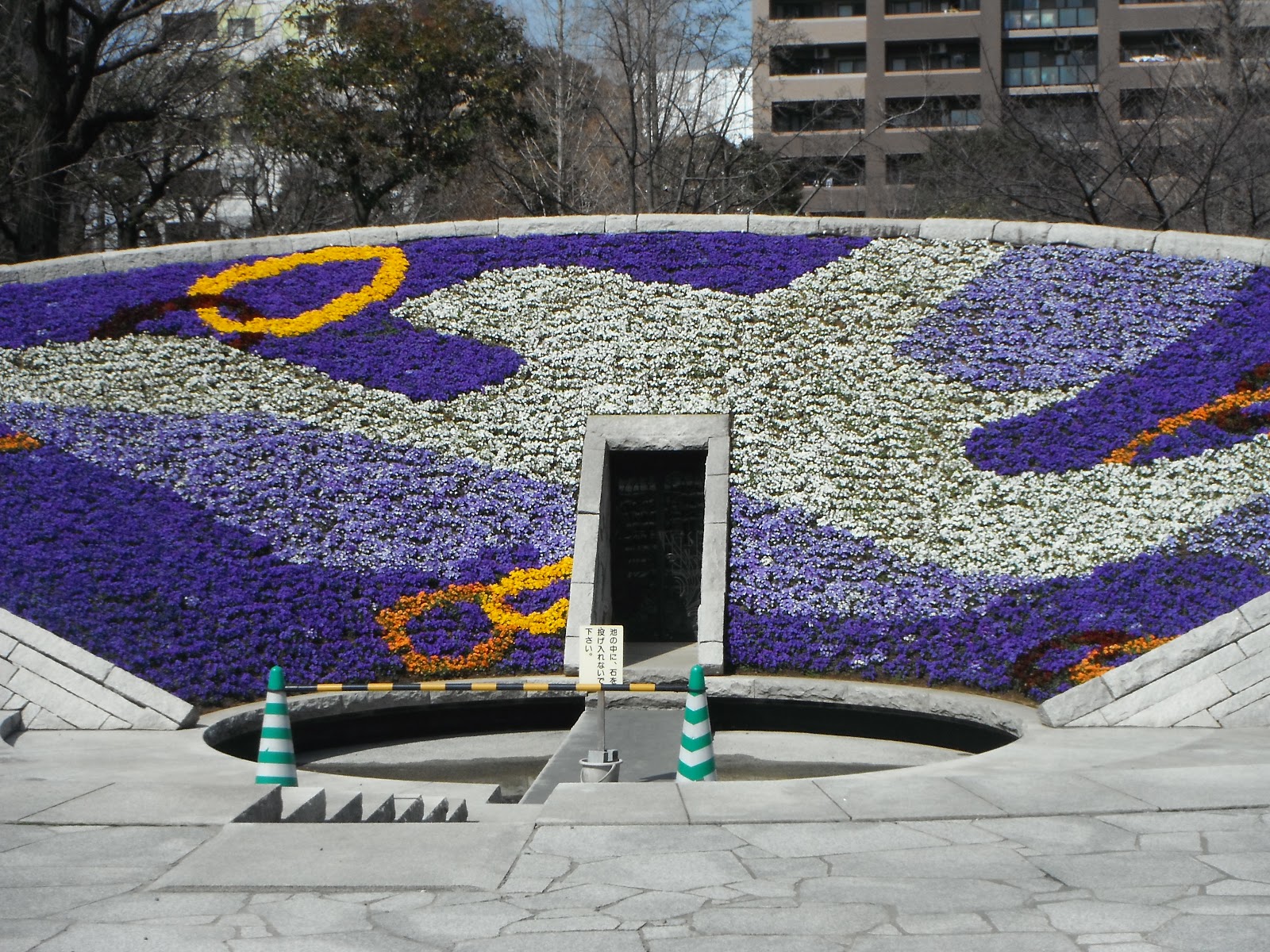 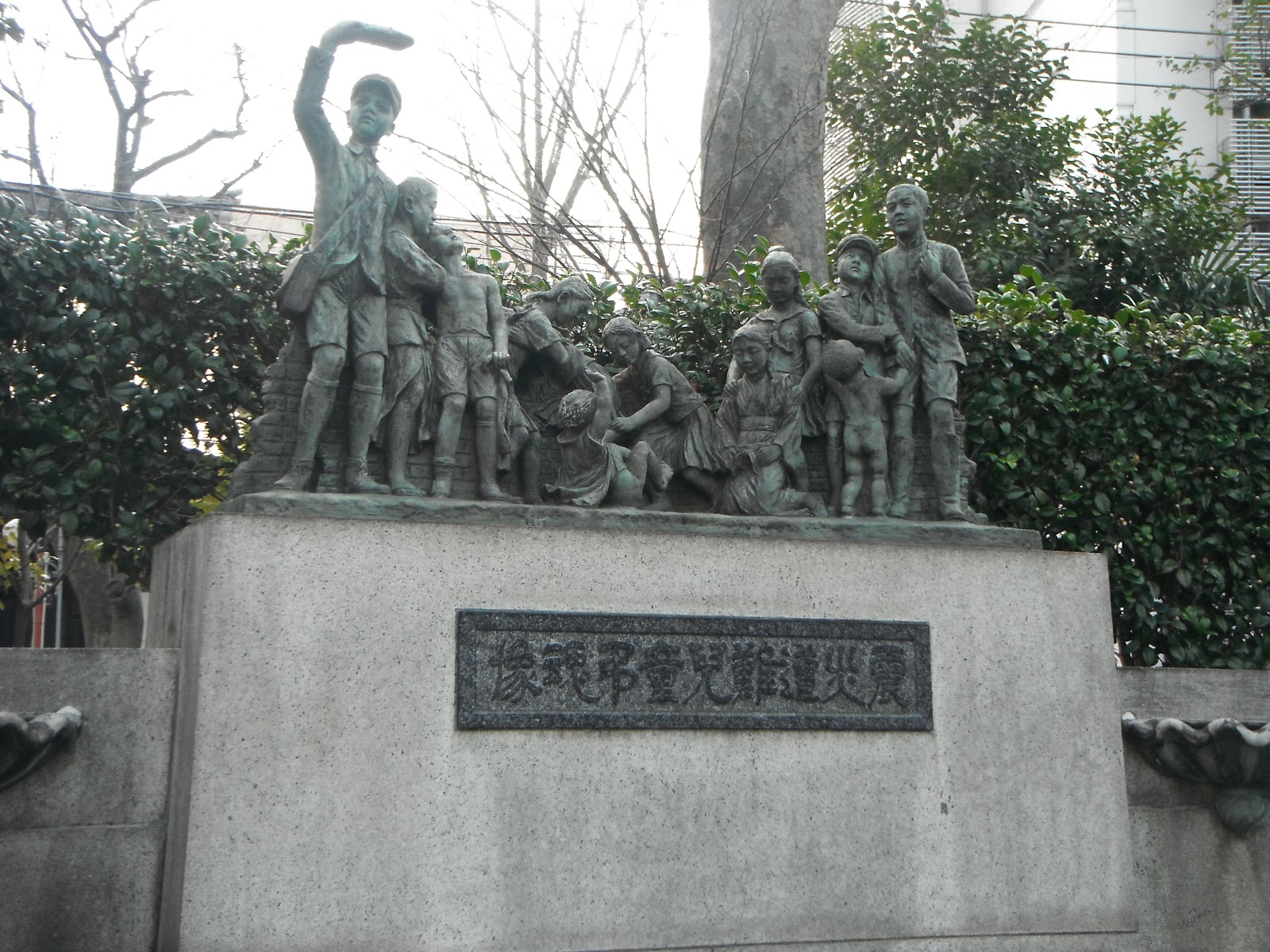 Located in a quiet suburb, Yokoamicho Park is easily overlooked, but I think it's one of the most poignant and peaceful places in Tokyo. This park was originally intended as a memorial to those who died in the Great Kanto Earthquake, but after World War II it also became a memorial to the victims of the Tokyo firebombings. The main feature of the park is the Dwelling of Remembrance, a striking floral monument dedicated to the air raid victims. There is also a small bronze statue depicting school children victims of the bombings, and a little outdoor museum, which shows everyday items warped into metal lumps as a result of the fires that destroyed much of Tokyo. Here, the monuments, statues and objects are simply left to speak for themselves.
Posted by The Only Blonde in Osaka at 19:14 1 comment:

"Tokyo Cheapo" and Japan on the Cheap

It's getting closer to graduation, and everyone I know seems to be planning elaborate travel adventures to celebrate their post-university lives. The details are all over Facebook like a rash. Music festivals in Europe. Road trips across America. Backpacking around Asia. As I will most likely be spending the majority of my summer in pyjamas watching my box set of Keeping Up With the Kardashians, I hate you all. What I don't understand is, how are you meant to afford all of this jet setting? It took me a whole year of working as a minimum wage slave to save up enough for 5 months studying in Japan, combined with scholarships and student living costs. How are you supposed to fund travel that is purely self-indulgent?

As a result of my travel-envy, I recently came across an excellent website, Tokyo Cheapo, which claims to be 'dedicated to giving the best advice for making your yen go further when visiting or living in Tokyo.' The guides cover an almost endless range of topics for enjoying Japan's notoriously expensive capital on the cheap, from where to eat the best ramen to where to have the cheapest sex, if that's what you're, uh, into.

One article that blew my mind was How to Spend 3 Nights in Tokyo All Included on 10,000 yen, or just over 150 NZ dollars. The author gives a complete itinerary of where to stay, eat, go and even what souvenirs you can buy on a budget of just 3000 yen per day. Obviously, a traveler following this itinerary needs to be prepared to 'rough it' a bit for 3 nights - the author's accommodation of choice is a 24 hour manga cafe - but what a cool experience, right?! And sometimes you can pick up grabaseat flights from Auckland to Tokyo for around $800... so following the Tokyo Cheapo guide would mean experiencing a few nights in Japan for LESS than $1000. This is now on my travel must-do list.

Thinking back to my time in Osaka, almost everything we did was with a budget in mind. To save money on food, we spent a lot of time at the Lawson 100 yen store, buying things like onigiri (rice balls), cup noodles, and breads for lunches. When we ate out for dinner, we often went to meal-ticket restaurants like Matsuya and Sukiya, where you can get a decent-sized bowl of gyudon or curry rice for under 500 yen. Instead of going to bars, a lot of the time we'd all go to convenience stores to buy alcohol and drink it on campus, with someone's iPod standing in for karaoke (naughty, but undeniably cheap). As for activities, sometimes the most interesting days were spent just walking around random neighborhoods, for a grand total of the 300 yen it cost for the train trip. Also, window shopping in crazy shops and fancy department stores (recommended for those with a certain degree of self control).
I think it's great how Tokyo Cheapo are showing that it's possible to fully experience Japan no matter what your budget is. And, as the saying goes, travel is the only thing you buy that makes you richer.
Posted by The Only Blonde in Osaka at 22:24 8 comments: