I'm behind the times, but I was catching up on news at Kansai Scene and just read there are plans to turn Dotonbori canal into a swimming pool. Whaaaaat?

Apparently Osaka's plan is to transform the canal into the world's longest swimming pool, to be called Pool Dotonbori. They hope to have it completed in time for the area's 400th anniversary in 2015.

The idea, while pretty epic, perplexes me. For one thing, Dotonbori canal is filthy. It has traditionally been somewhat of a headache for the Osaka City Council thanks to the legendary activity known as the 'Dotonbori Dive', in which drunk Osakans challenge each other to leap into the murky waters, especially after baseball games. Participants have been repeatedly warned of the toxic nature of the canal - according to the Council, there are 28 sewer outlets dotted along the river. Breathe it in, kids.

And why are they trying to transform Dotonbori - historically an area of shenanigans, vice, and self-indulgence - into a wonderland for watersports? It goes against everything Dotonbori represents. The catchphrase for Dotonbori is kuidaore, or eat until you drop. It is Japan's foodie destination. It is home to takoyaki and okonomiyaki. You're not supposed to swim after you eat at the best of times, so why would you put a swimming pool in the middle of a place where you are supposed to EAT until you DROP?

Glico Man, you athletic bastard. I bet this was all your idea. 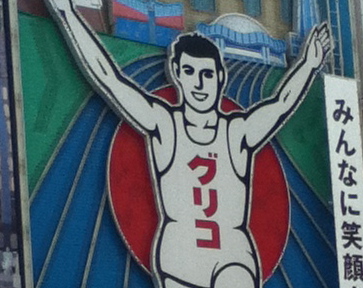 Last weekend, Rialto Cinemas held the Reel Anime Film Festival, screening four recently released Japanese animation films. I went with Ryman on Film to watch two of the anime, Wolf Children Ame and Yuki (Ōkami Kodomo no Ame to Yuki), and Studio Ghibli's latest masterpiece, From Up on Poppy Hill (Kokuriko-zaka Kara). Both were beautiful and relaxing to watch, but Wolf Children was my favourite, because the story was just so adorable.

Admittedly, it took me a while to appreciate anime. I was brought up on a steady diet of Disney and didn't understand the point of an animated film that didn't have blonde princesses or song and dance routines. Like many in the west, my introduction to the style came with Hayao Miyazaki's Spirited Away, which I found strangely enchanting. Then I discovered My Neighbor Totoro, Kiki's Delivery Service, and Grave of the Fireflies. To this day, Grave of the Fireflies remains one of the most powerful films - animated or not - I have ever seen.


Studio Ghibli is the leader of Japanese animation, and when we were in Tokyo, we visited the Ghibli Museum in Mitaka. We got off at Mitaka station, and walked along the tree-lined streets, admiring the traditional houses and enjoying the crisp air away from inner-city Tokyo. Every few metres was a post topped off with a little smiling Totoro, pointing out landmarks along the bus route to the museum.

After a 15 minute walk, we arrived at the museum, a fairytale-like yellow building surrounded by greenery, complete with a spiral staircase and tower. Totoro presides over the window of the entrance, watching you approach the museum.

Inside the museum are a series of rooms displaying the artwork and animation process of Ghibli films, with many recognizable characters decorating the walls. There is a Cat Bus for children to play on, and a movie theatre where you get to watch a special short film exclusive to the museum. On the rooftop is the giant robot from Laputa: Castle in the Sky. There is also a gift shop, and Ghibli-themed cafe.
The Ghibli Museum was a magical place to spend an afternoon in, and I can't believe I'm saying this, but I even preferred it to Tokyo Disneyland. It's the only one of its kind, and you learn a lot about the studio and how their films are made. Tickets are 1000 yen, and must be purchased in advance. You can do this from an affiliated travel agency in your home country, or if you're resident in Japan, they can be purchased from Lawson. For more information see the Official Ghibli Museum Wesbite.

Posted by The Only Blonde in Osaka at 14:51 No comments: