Do you hear the people sing?

As luck would have it, I landed in Hong Kong right amid one of the biggest news stories in the world. Over the past two weeks, thousands of young Hong Kongers have taken to the streets, protesting for full democracy. China is offering a watered-down version, with its plans to pre-screen political candidates so it can essentially control elections

It is said to be China's biggest democracy movement since the 1989 Tiananmen Square demonstrations in Beijing. This is something one of my colleagues back home took pleasure in bringing up before I left, helpfully advising me to stay away from tanks.

It seems like the protests are starting to die down now, so on Tuesday night I decided to head to the main site in Admiralty district, near the government headquarters.

Emerging from the station, the first thing you notice is the sea of posters, messages and artworks, haphazardly stuck to walls and posts. Some are simple, scrawled in pen, while others could have been created by graphic designers. "Keep calm and open your umbrella", says one. "Listen to our thought," says another. Yellow ribbons, which have become one of the main symbols of the movement, are everywhere, tied to fences and gates, pinned to the shirts of supporters. I even saw a baby on the subway playing with one, curling it around his little fingers.

It is eerily quiet and empty on the outskirts of the protest zone. First aid sites are abandoned, but remain stocked with supplies, in case the police come back with tear gas.

Round the corner onto the main road, and even now, with protester numbers dwindling, the scene catches your breath.

Against a backdrop of towering skyscrapers are hundreds and hundreds of people, dotted like little dark ants along the highway. Some are sitting barefoot on rugs, shoes neatly placed at the edge, while others are perched atop of the highway barriers. Along the way are ladders and crates so people can safely climb over. A man reached out to help pull me across to the other side.

There was suddenly a mild commotion - something set the protesters off, causing them to burst into song. They started singing happy birthday in both Cantonese and English, apparently to drown out their opponents.

Music is a recurring theme. A giant banner stretches across an overbridge bearing the words of the Les Miserables anthem, "Do you hear the people sing?"

On the opposite bridge is John Lennon's Imagine: "You may say I'm a dreamer but I'm not the only one".

Perhaps most eye-catching of all is the "Lennon Wall", covered in a rainbow of Post-It notes featuring messages of support for democracy. Markers and notes are provided so visitors can add to the wall, make their mark on history - however impermanent it may be. As one of the notes says, "everyone deserves freedom of expression!"

At the base of the wall is the striking "Umbrella Man" statue. He is made out of wooden blocks and carries a golden umbrella, bathed in the light of a street lamp.

As I spent the hour wandering around, I thought about what it all meant for Hong Kong, what it meant for China, and what it could mean for history. Then I thought about New Zealand's most recent election, and the "missing million" who decided not to vote.

I don't think they know what it feels like to hear the people sing. 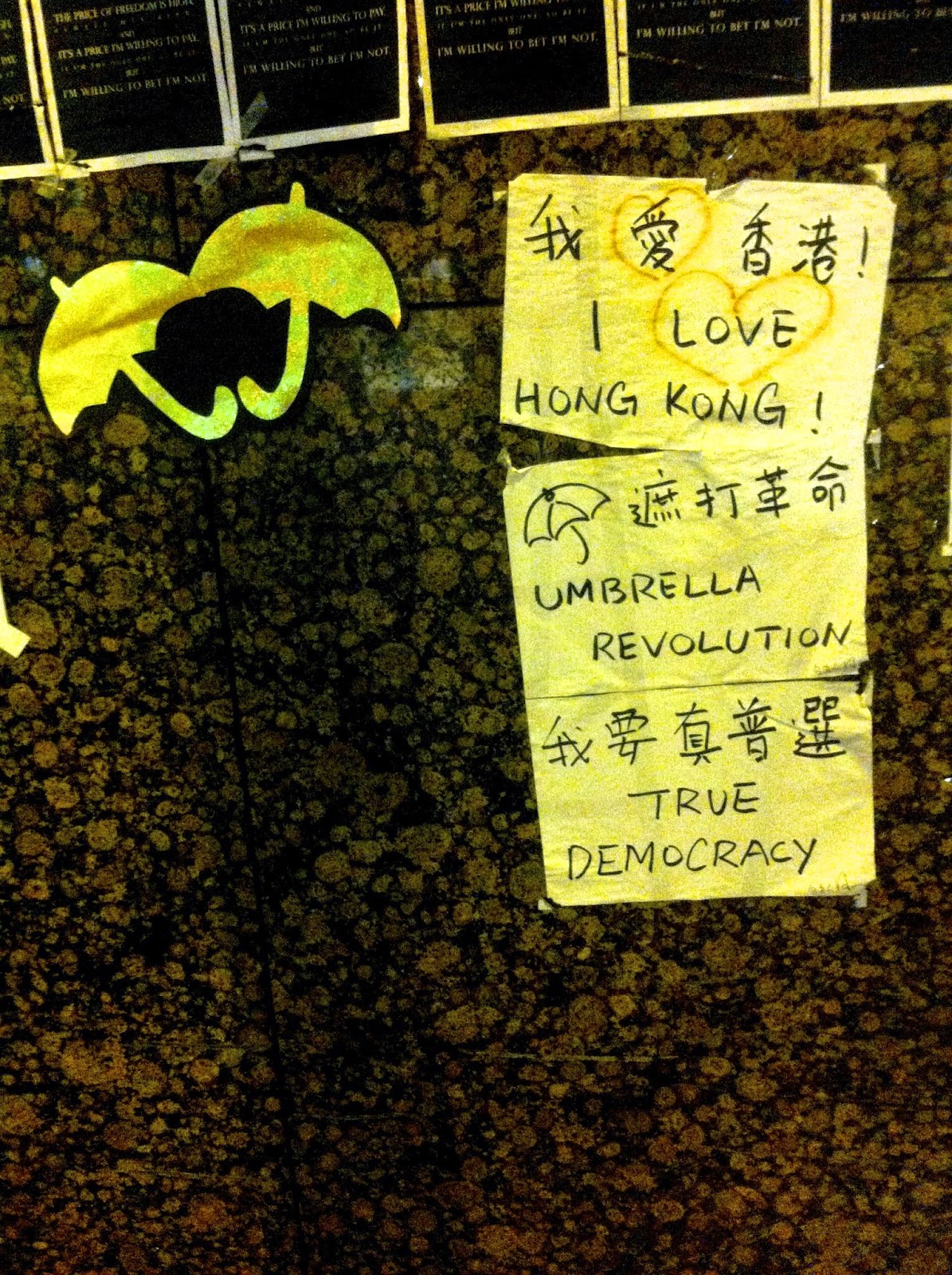 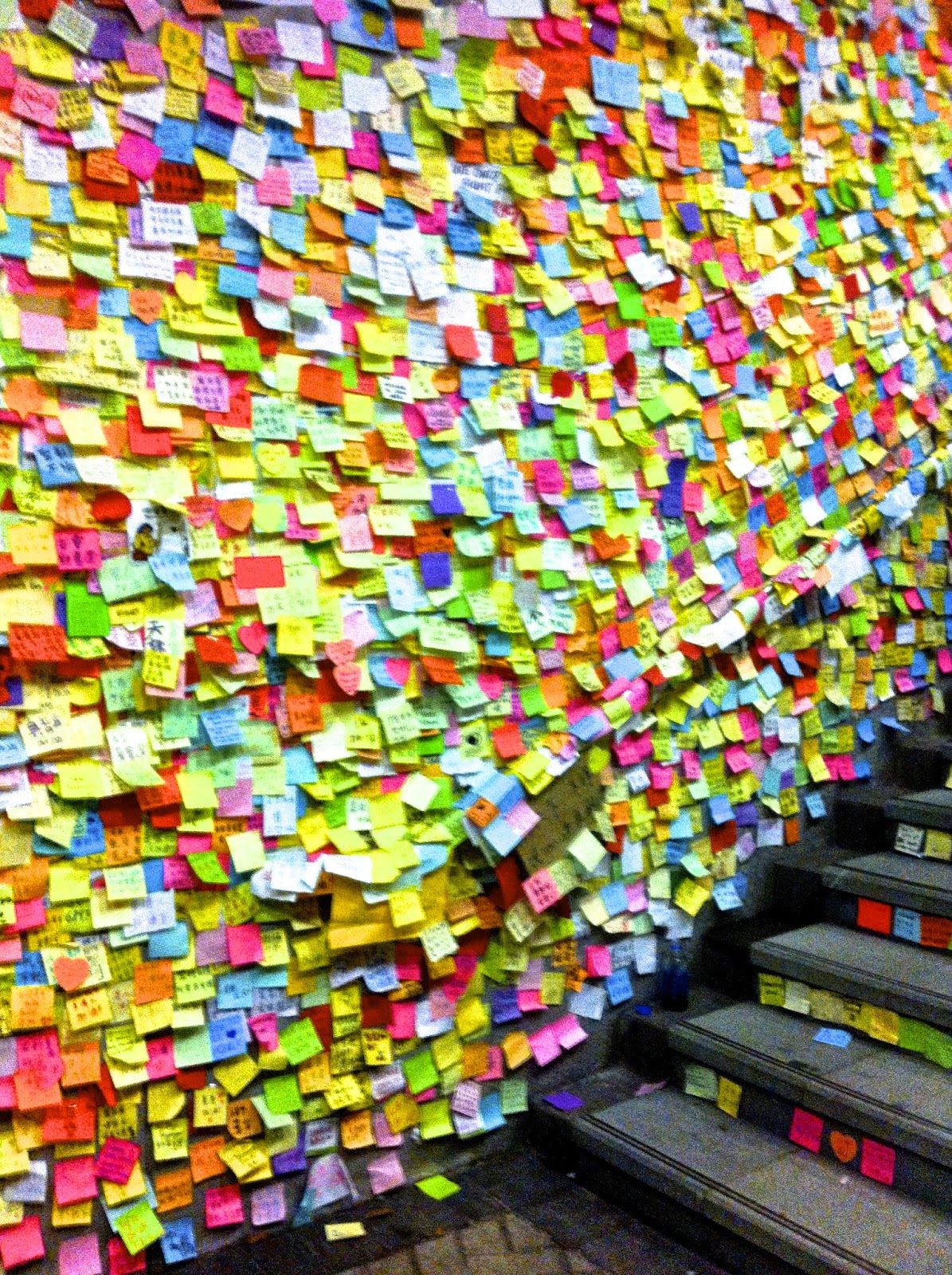 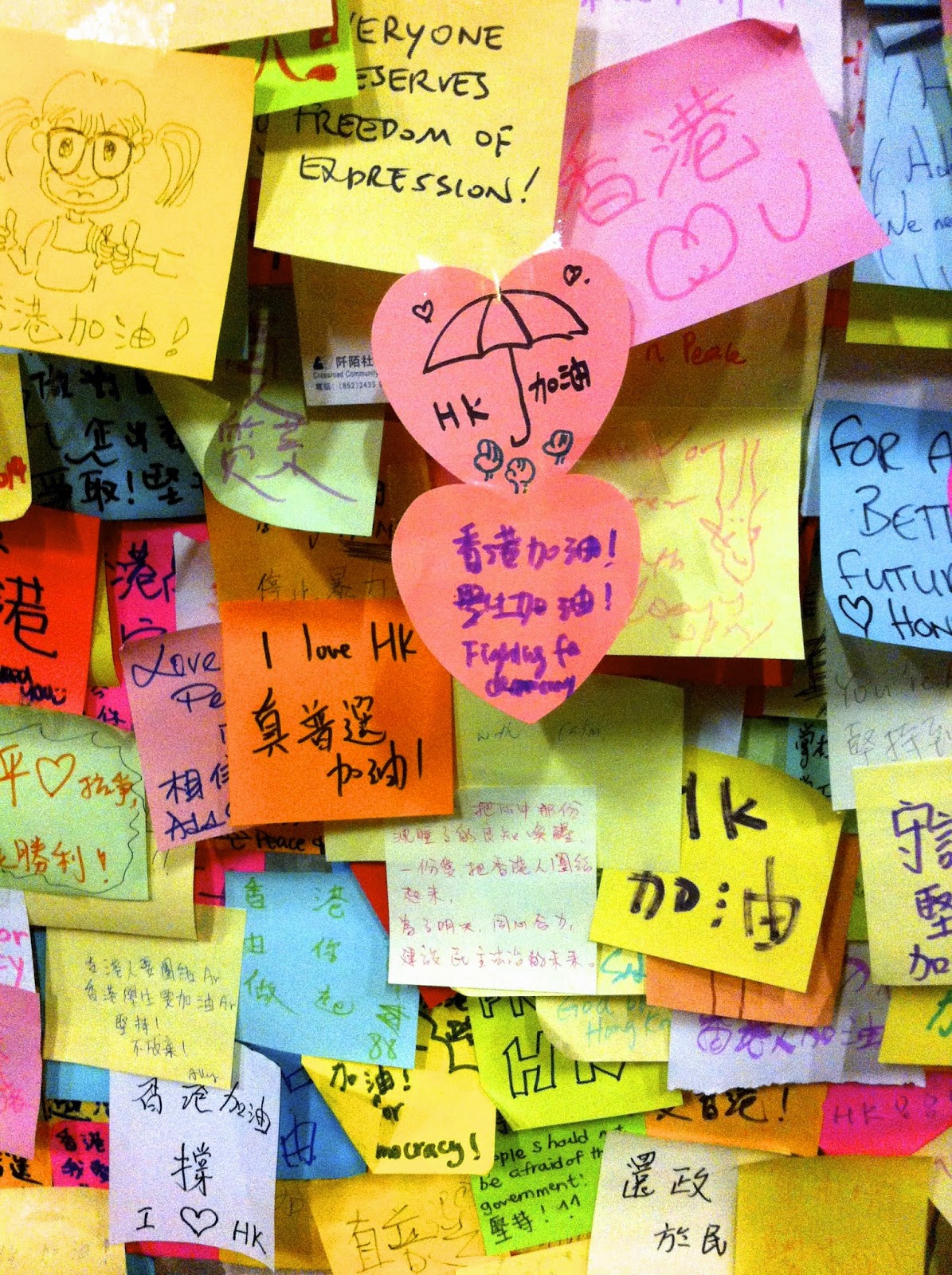 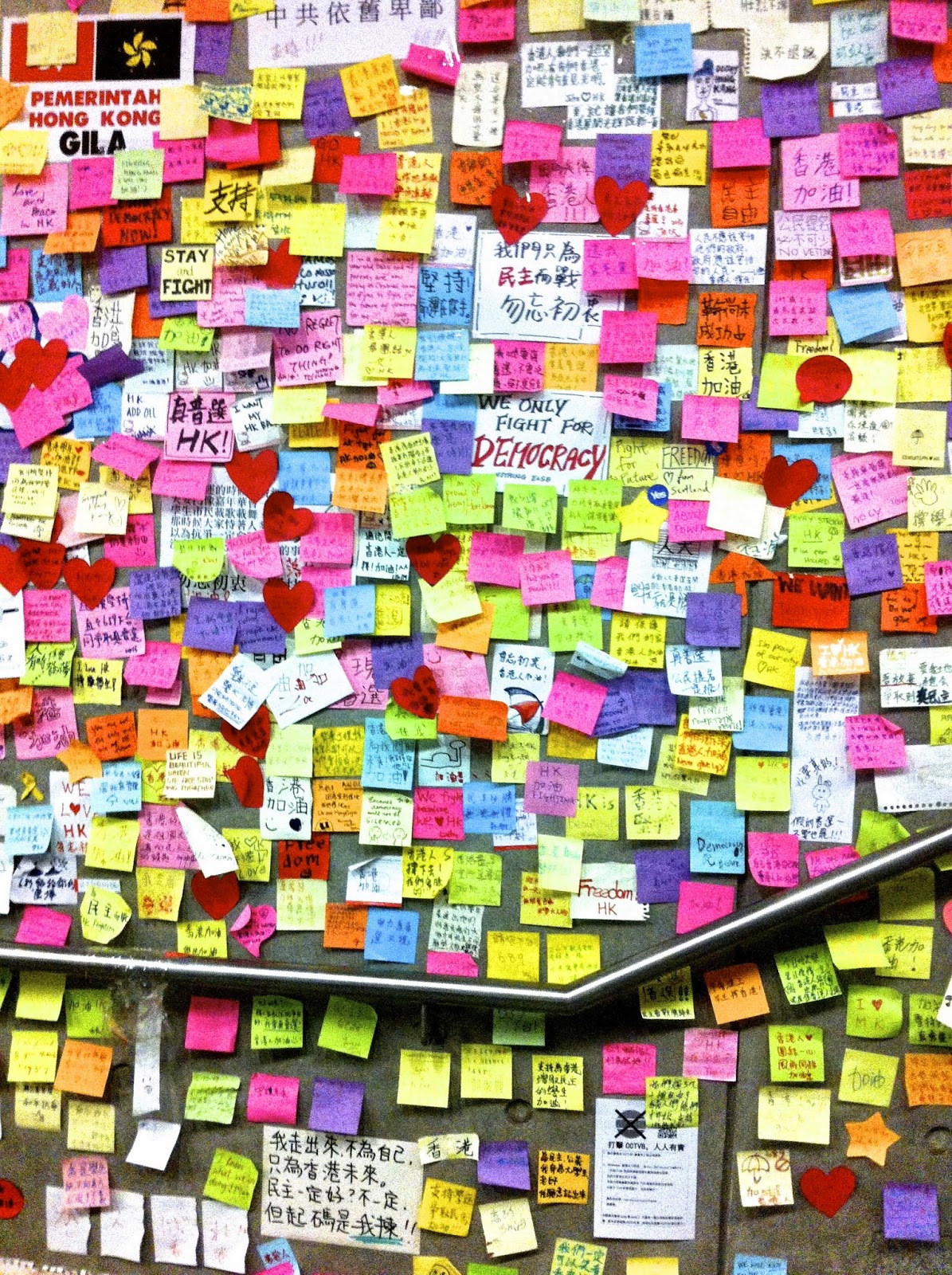 Note: Sorry these photos are so crappy quality, aside from my general lack of photography skills I don't have a proper camera yet so these were iPhone jobs.
Posted by The Only Blonde in Osaka at 06:18